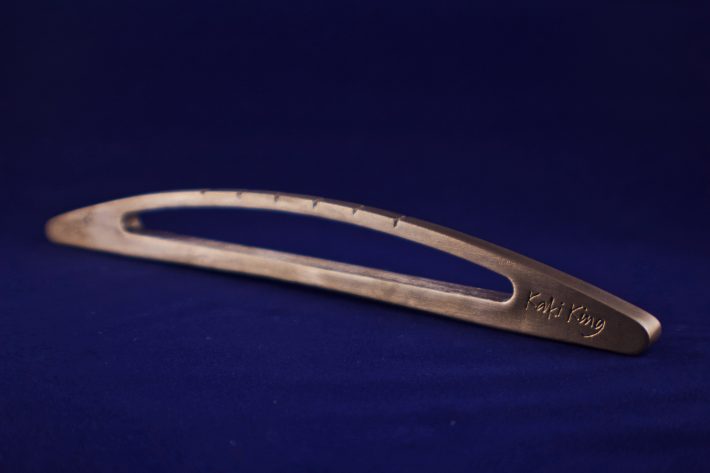 The new Passerelle Bridge, from legendary luthier Rachel Rosenkrantz, is the result of a collaboration with famed fingerstyle guitarist Kaki King. Taking inspiration from eastern zithers like the guzheng, koto, and gayageum, Rosenkrantz and King developed this bridge so that you could easily and non invasively turn your traditional six string guitar into a twelve note instrument. 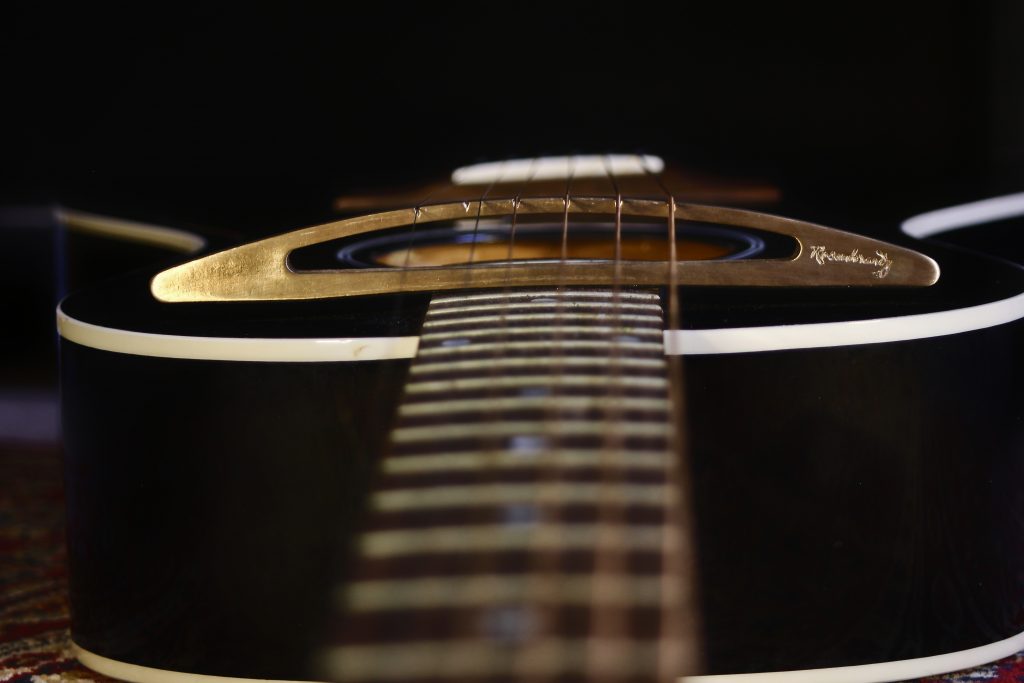 Each one of Rosenkrantz’s Passerelle Bridges is hand made in her shop in Providence, RI, using the traditional lost wax technique of bronze casting. The material and the technique combine to make an elegantly earthy looking device. The Passerelle is designed to be placed directly on top of a fret, and as such, the underside of the bridge has groove that is made to fit snugly and securely on a fret of your choosing (the underside of the Passerelle is covered with felt so as to protect your instrument from scratches). The top of the bridge has a comfortable radius and features six grooves, one for each string. Care has been taken to make sure that there are no rough edges in or around the grooves, so that your strings can move fluidly and without any risk of snagging. Once installed, the Passerelle can be easily adjusted to get the intonation just right, thanks to its winged design. The bridge bears the signatures of both Rosenkrantz and King, and as a final touch each Passerelle is numbered by hand to indicate its place in the batch. The Passerelle’s aesthetic value is extremely high and will add a touch of class and intrigue to any instrument it graces. It is no secret that Rachel Rosenkrantz has an incredible eye for detail, and a thoughtful approach to construction, and even though the structure of the Passerelle pales in comparison to one of her instruments, Rosenkrantz’s unique touch is evident on every surface of this accessory. 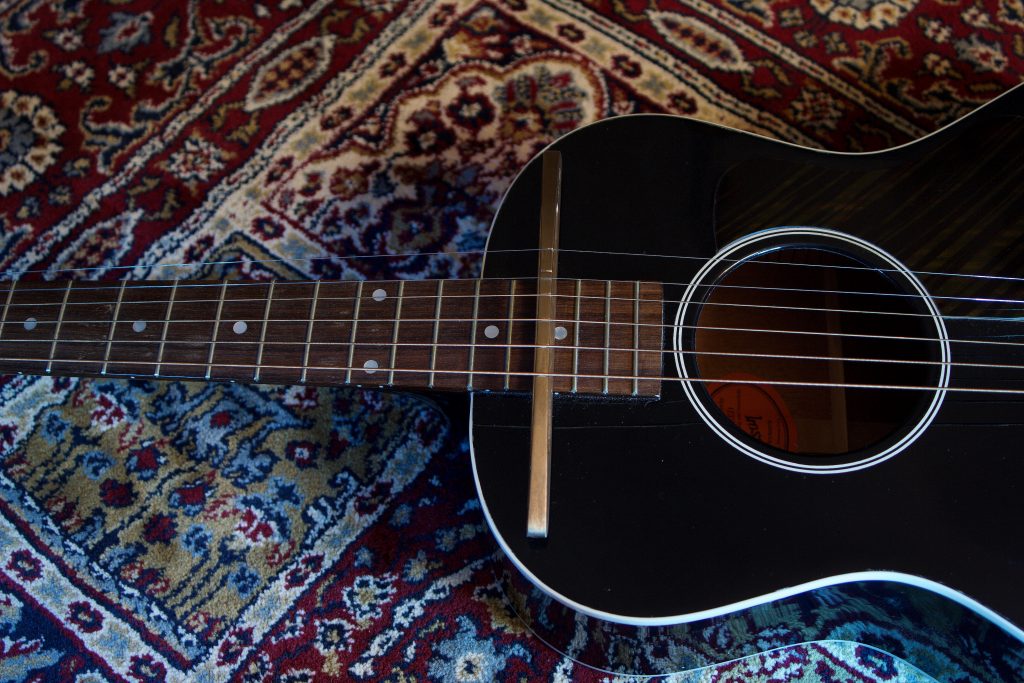 When installed, the Passerelle allows you to play 12-voiced chords, bend strings with extreme accuracy, and run through harp-like arpeggios. Much of the sound will be determined by your particular instrument, but we tested our Passerelle on a Goodall jumbo, as well as on a Gibson Blues King and found that both instruments spoke beautifully with the addition of the Passerelle. Vibrato becomes a whole new game, and for those of you who are unfamiliar with the guzheng, koto, and gayageum should seriously consider doing a quick YouTube search for some inspiration and to learn more about the possibilities that come with having an instrument with this kind of a bridge.

Since the Passerelle significantly elevates the strings, the instrument becomes playable from both sides of the bridge, and which fret you place it on will determine at which pitches the open strings sound. Rosenkrantz and King suggest that you start by placing the Passerelle at the 16th fret, which creates the interval of a 5th between the two sides, but you can of course place the Passerelle on any fret to get a different interval between the two sides (12th fret for a unison, 11th fret for a Major 2nd, and so on). 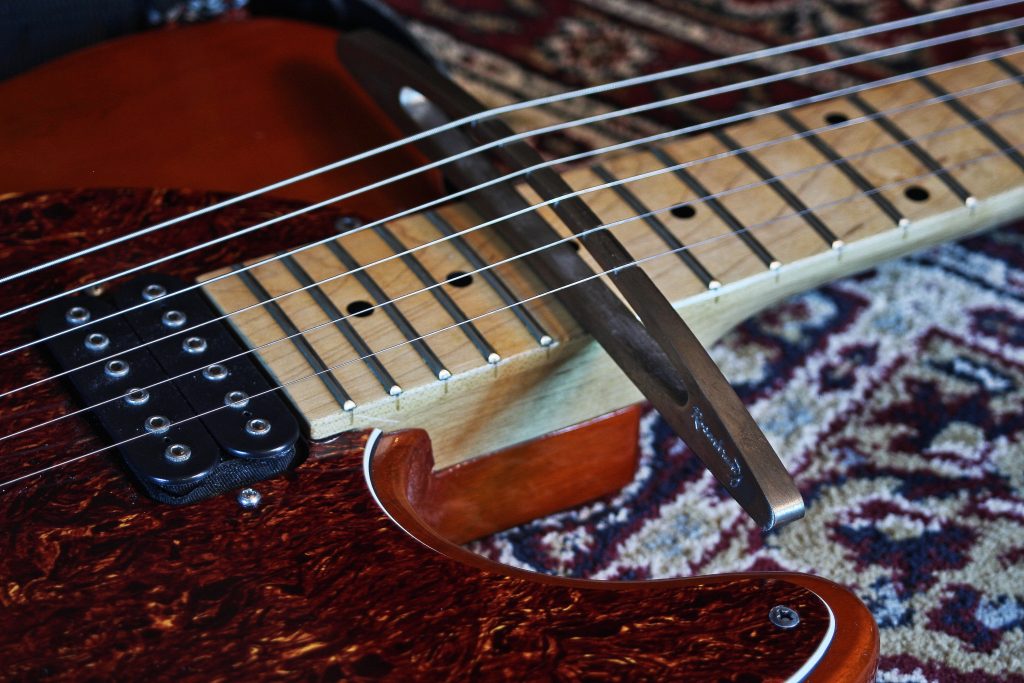 We were surprised to find that the Passerelle was actually fairly easy to get accustomed to, and we chalk much of that up to the level of craft that went into making it. With some tunings we did notice the strings slipping out of the nooks from time to time, though this would be an easy enough issue to solve.

The Passerelle Bridge is a fun, useful, and extremely usable tool that is perfect for anyone who wants to explore beyond the traditional limits of their instrument. More than just a tool for imitation, the Passerelle opens up entirely new worlds of musical possibility; from new tunings, to microtones, to twelve voice chords, and beyond. If any of this sounds interesting to you then we seriously encourage you to delay no longer and get one for yourself.