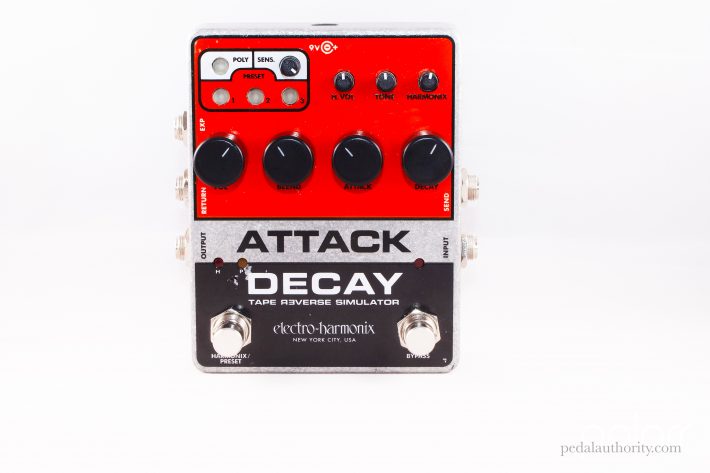 View Price on Amazon View Price on Ebay
The Electro-Harmonix Attack Decay Tape Reverse Simulator is a modern reinterpretation of the company’s legendary pedal of the same name. The original Attack Decay pedal was known for “producing volume and reverse swells, backward tape sounds, artificially short staccato notes and bowed instrument effects.” This level of control over your volume envelope can typically be had with synthesizers, or with the aid of a computer, but plucked instruments, such as guitars, are typically more limited when it comes to envelopes of attack. As such, the original Attack Decay pedals are highly sought after items, but few enough were made that the supply does not meet the current demand. This is undoubtedly one of the reasons that vintage Attack Decay pedals have recently been fetching ridiculously high prices on the used market. This year, Electro-Harmonix came to the rescue by choosing to re-release this legendary pedal, with the addition of some modern touches, including a polyphonic mode, an effects loop, and a programmable preset bank. 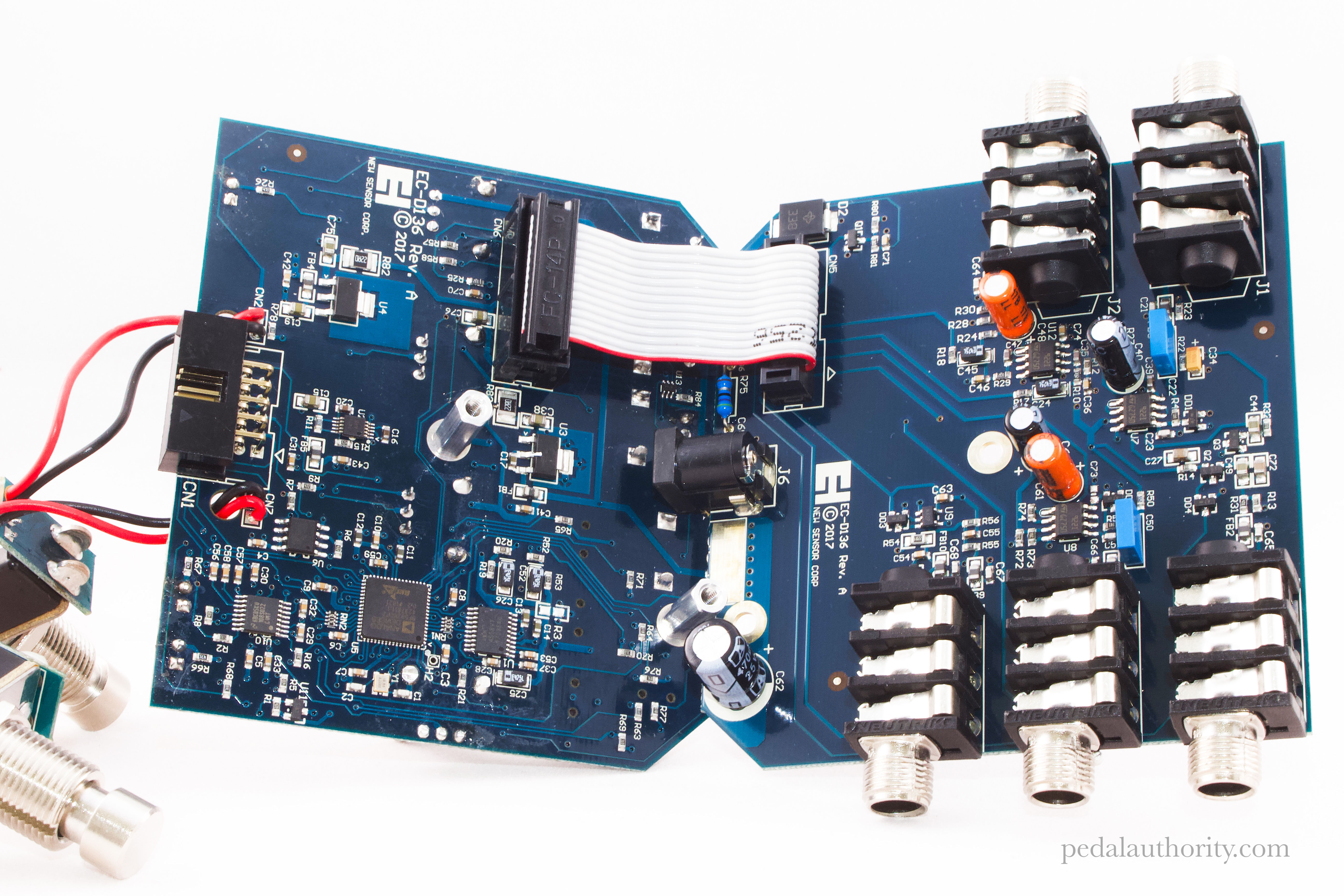 Before talking about the features, let’s first talk about the “Tape Reverse Simulator” part of this pedal’s name. This pedal does not record your signal and play it back reversed, so if that is what you are looking for, this is not it. However, what this pedal does do is allow you to change the perceived envelope of your instrument’s attack. Plucked instruments typically have very short attack times, meaning that the time from the point of a physical attack (say, a string pluck), to the full amplitude that is generated by this attack, is basically instantaneous. The decay, however, tends to be significantly longer, especially when dealing with amplification. The combination of the attack and the decay can be referred to as the envelope of attack, or the volume envelope. So if the typical volume envelope of a plucked guitar string involves a short attack time followed by a long decay time, then one of the most striking things about reversing a sound clip of a single plucked string will be that this scenario is reversed. This is often referred to as a backwards envelope. Now, one of the things that this pedal does is allow you to change the perceived attack and decay times, thereby providing you the opportunity to create the illusion of backwards envelopes, or reversed guitar parts.

Here is a breakdown of the Attack Decay pedal’s controls and functions.

VOL: controls the master output of the pedal. It may seem simple, but a master volume control is always something that we like to see on all pedals including modulation pedals.

BLEND: has the possibility to serve three different functions:

ATTACK: controls the fade-in speed of the incoming signal. With the knob at the lowest position, the fade-in is imperceptible, but as you turn the knob up the fade-in time increases. In mono mode, the attack time range is 4 ms to 8 seconds.

DECAY: controls the fade-out speed of the signal. With this knob at its highest setting, the Decay function becomes disabled, and your instrument’s signal is allowed to sustain as it would normally (this knob does not have any effect on the Attack control/fade-in time). As you bring the knob down, the amount of time before your signal is cut is reduced. With this knob at lower settings, you can get some very cool staccato and percussive effects. Among other things, you can use this function to mimic the sounds of other plucked instruments such as banjos, and various non-Western instruments. In mono mode, the decay time range is 4 ms to 8 seconds.

SENS: controls the pedal’s sensitivity to the incoming signal. Turn the knob down to decrease the sensitivity, and up to increase it.

POLY: allows you to switch between mono and poly modes. The original Attack Decay pedal was monophonic and so mono mode is designed to allow you to recreate that classic sound. When mono mode is engaged, each time a new pluck is triggered from your instrument the entire volume envelope resets to the beginning of the attack slope. Poly mode allows you to play consecutive notes without re-triggering the volume envelope of the entire signal. Rather, in poly mode, you can play arpeggios, for instance, and each note will have its own envelope. One thing to know about poly mode is that with some settings an extra, sort of digital sounding, artifact is present in the signal. EHX describes this as a “bubbling” kind of sound. Depending on your perspective, this artifact could be seen as a welcome addition to the overall effect of the pedal, similar to the signal modulation or distortion that analog delay pedals often generate.

PRESET: There are three buttons, labeled 1, 2, and 3, located under the Preset label. Each one of these buttons allows you to toggle a preset on or off. When a preset is engaged, its button will light up. Additionally, there is the option to make the pedal’s left footswitch a toggle button so that you can switch through your presets without having to reach down.

H.VOL: controls the output level of the fuzz (a.k.a. Harmonix) function.

HARMONIX: basically a drive or gain control for the fuzz (Harmonix) portion of the pedal. There is a generous amount of saturation on tap here, so you can really fine tune your violin/cello/Eric Johnson tones with this pedal. The overall feel of this fuzz is not far off from that of a Big Muff.

SEND/RETURN: these jacks allow you to utilize the Attack Decay’s effects loop for additional control over the modulation section of your pedalboard.

EXP: a single inbound jack that allows you to connect an expression pedal and have even more hands-free control over the Attack Decay pedal. 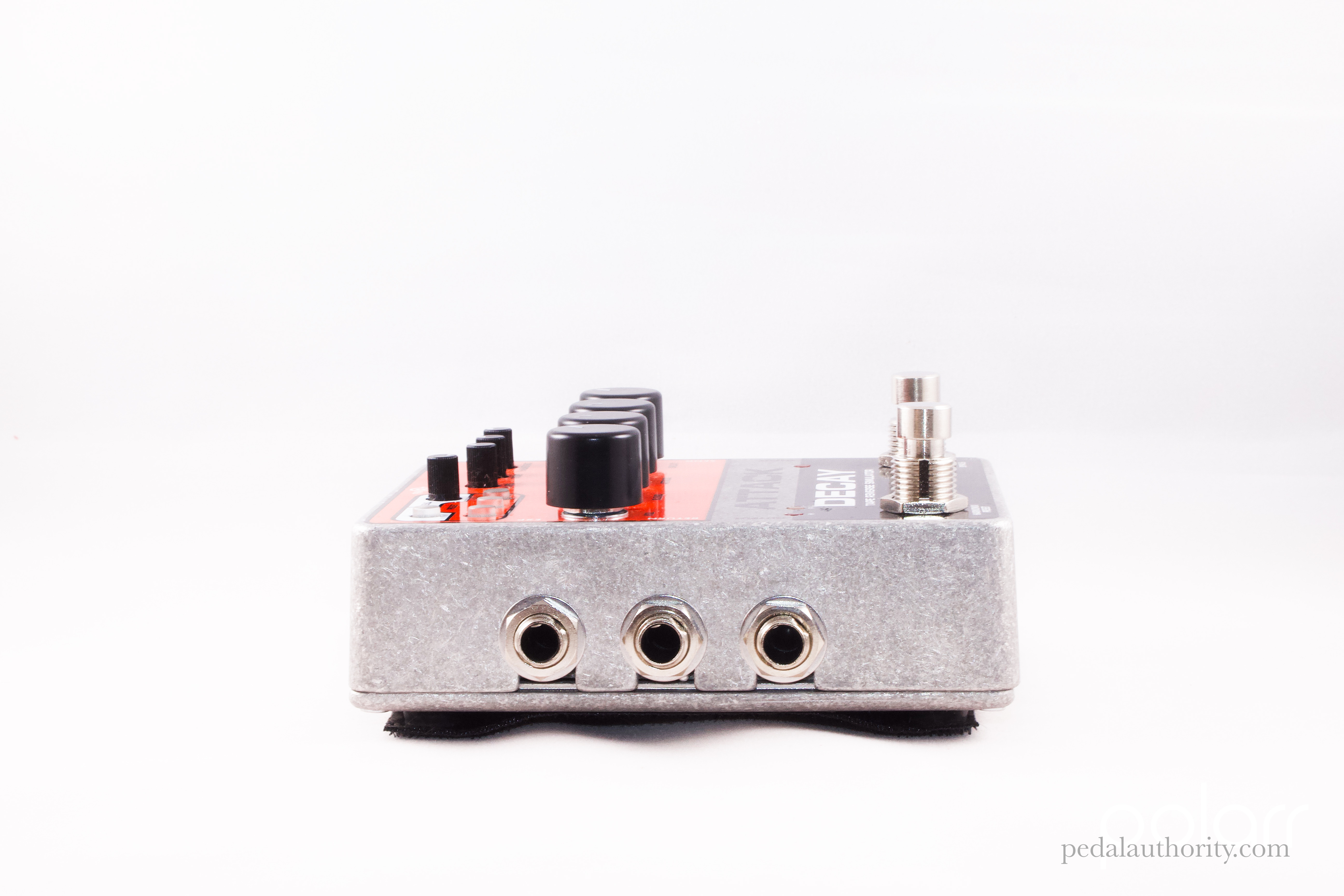 Additionally, the Attack Decay pedal contains numerous other secondary functions that can be accessed, and which allow you to further personalize your experience and sound. These functions include three different envelope curves, an internal compressor, and various alterations to the internal signal path. 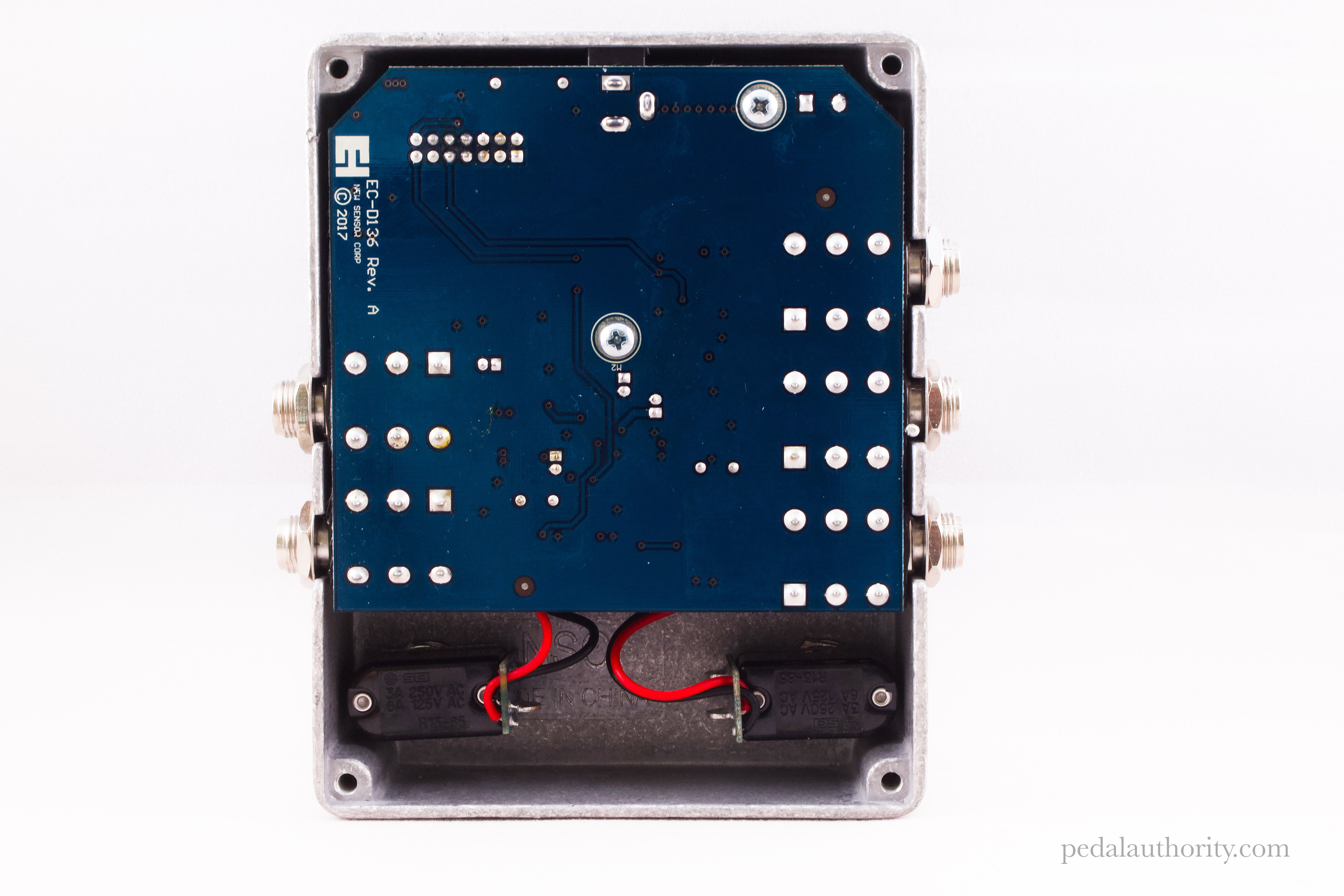 Not too much signal loss here, and the fundamentals are well preserved.

We wanted to demonstrate this pedal at a relatively neutral setting. The shape of the sound is basically unaffected going through, and in a live context you might not know the pedal is on. Obviously the amplitude is slightly lower, but this is as close to unity that this pedal gets before it starts to clip and add substantial artifacts.

Here you can see that with the volume control maxed out, this pedal has a significant amount of gain. At first sight this might seem like a problem, but consider that the controls are still in a neutral position here, meaning that neither the attack nor decay parameters are really being engaged. Although it looks absurd in this context, the ample gain is extremely useful in the context of volume swell settings, as it allows for the notes to sustain long enough for the effect to be heard. You can also see that there is a pretty hard high cut filter at about 17.5 kHz when Mono mode is engaged. In context, this does not seem to detract from the overall tone, but rather focuses it.

Same settings as before, but with the Poly function engaged. You can see the addition of a lot of upper frequencies. These extra frequencies contribute to that “bubbly” sound that is often present when the Poly function is engaged. Again, not a bad thing. In practice it often sounds quite organic and nice.

Here the Harmonix (fuzz) function is engaged as well. You can see that the saturation provides a frequency distribution similar to what you would get with similar settings on a Big Muff. 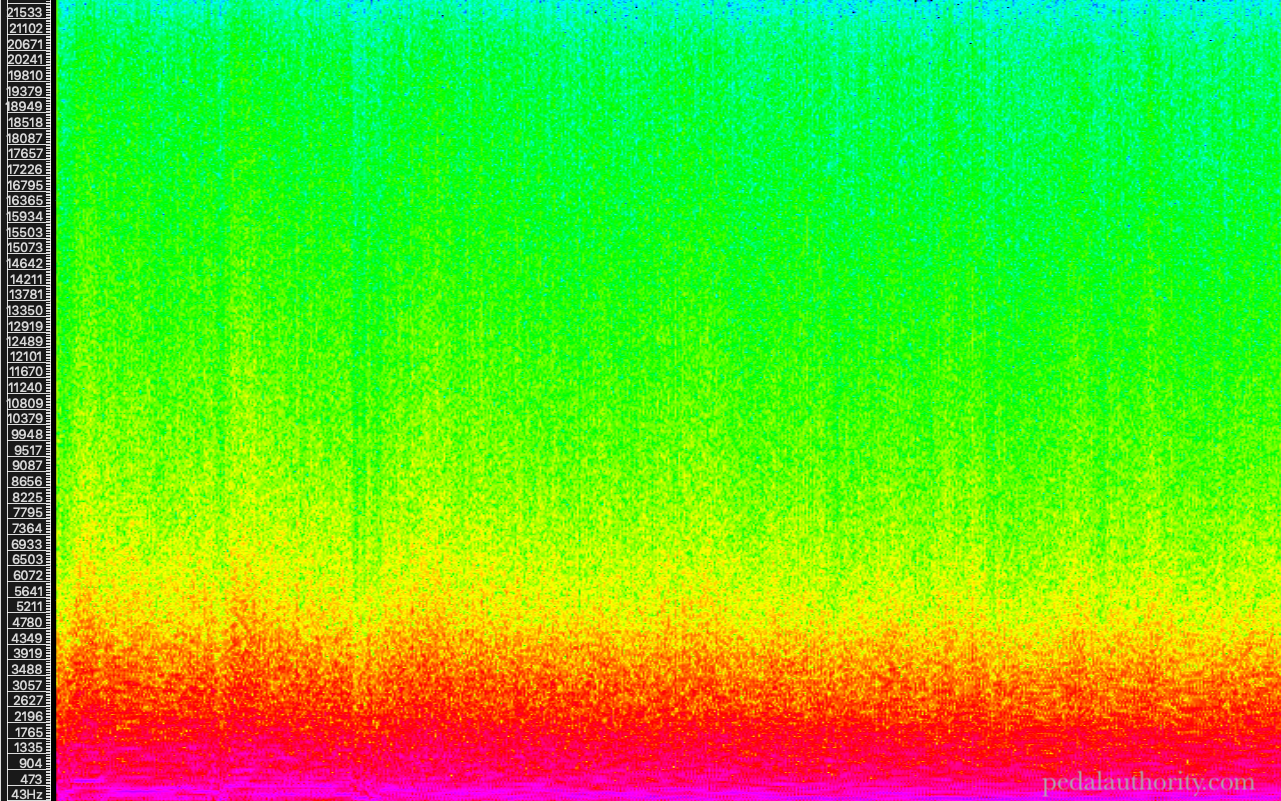 Same settings as above, but with Poly engaged. Notice the absence of the high cut filter.

Overall, the Attack Decay Tape Reverse Simulator from Electro-Harmonix is an excellent pedal. The design is at once classic and modern, the footprint is modest, and the price is reasonable. If this seems like your kind of thing, it is definitely worth checking out.