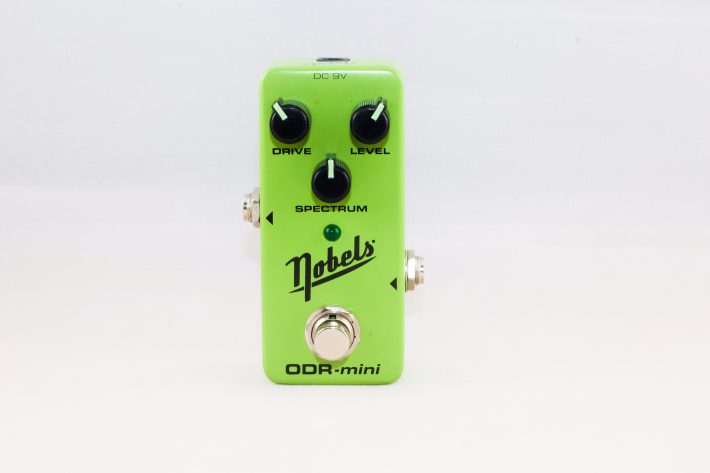 View Price on Amazon View Price on Ebay
The Nobels ODR-Mini is the company’s newest take on their classic ODR-1 overdrive pedal. An old favorite amongst Nashville legends, the ODR-1 has recently experienced an increase in exposure, thanks in large part to the YouTube gurus from That Pedal Show, who are quite fond of the pedal; as well as to Brian Wampler, who has featured the ODR-1 in several of his videos. Our own review of the ODR-1 has even become one of our most viewed pages, indicating the increase in curiosity and interest around Nobels’s flagship pedal. Neither a tubescreamer, nor a klone, the ODR-1 is distinct enough to warrant a space on pedalboards far and wide. And while there are many innovative and useful things about the pedal’s design, it does take up more space than a standard Boss pedal, which for many people is enough to render it impractical for inclusion on their boards. 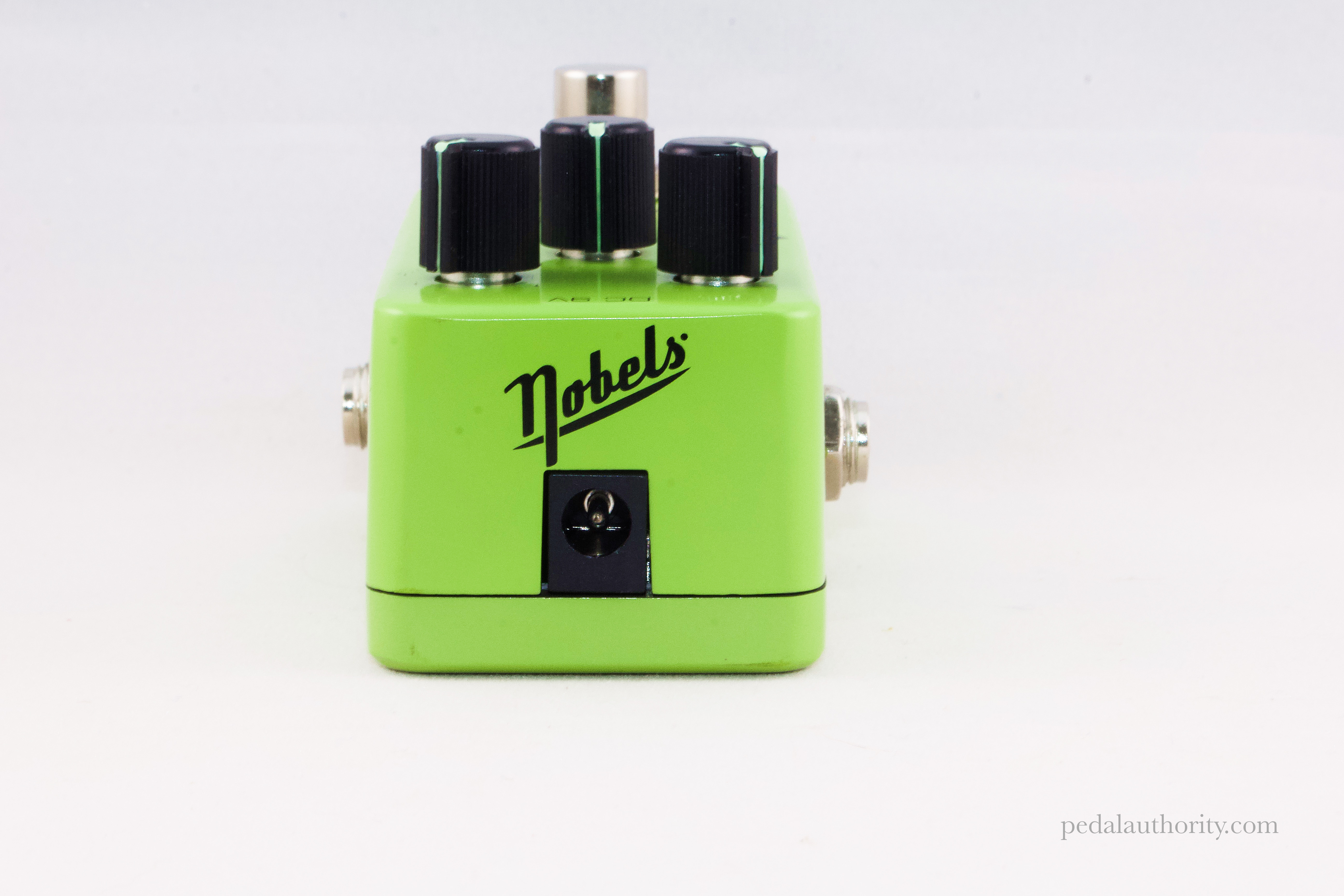 As a solution to this problem, Nobels recently decided to release a mini version of the ODR, the ODR-Mini. This new and compact take on the classic circuit is about a third of the size of the original, yet still packs all of the tone that we have come to expect from the ODR series. However, the Mini is not merely a carbon copy of its older brother, as it features a few changes to suit the tastes of the modern player. 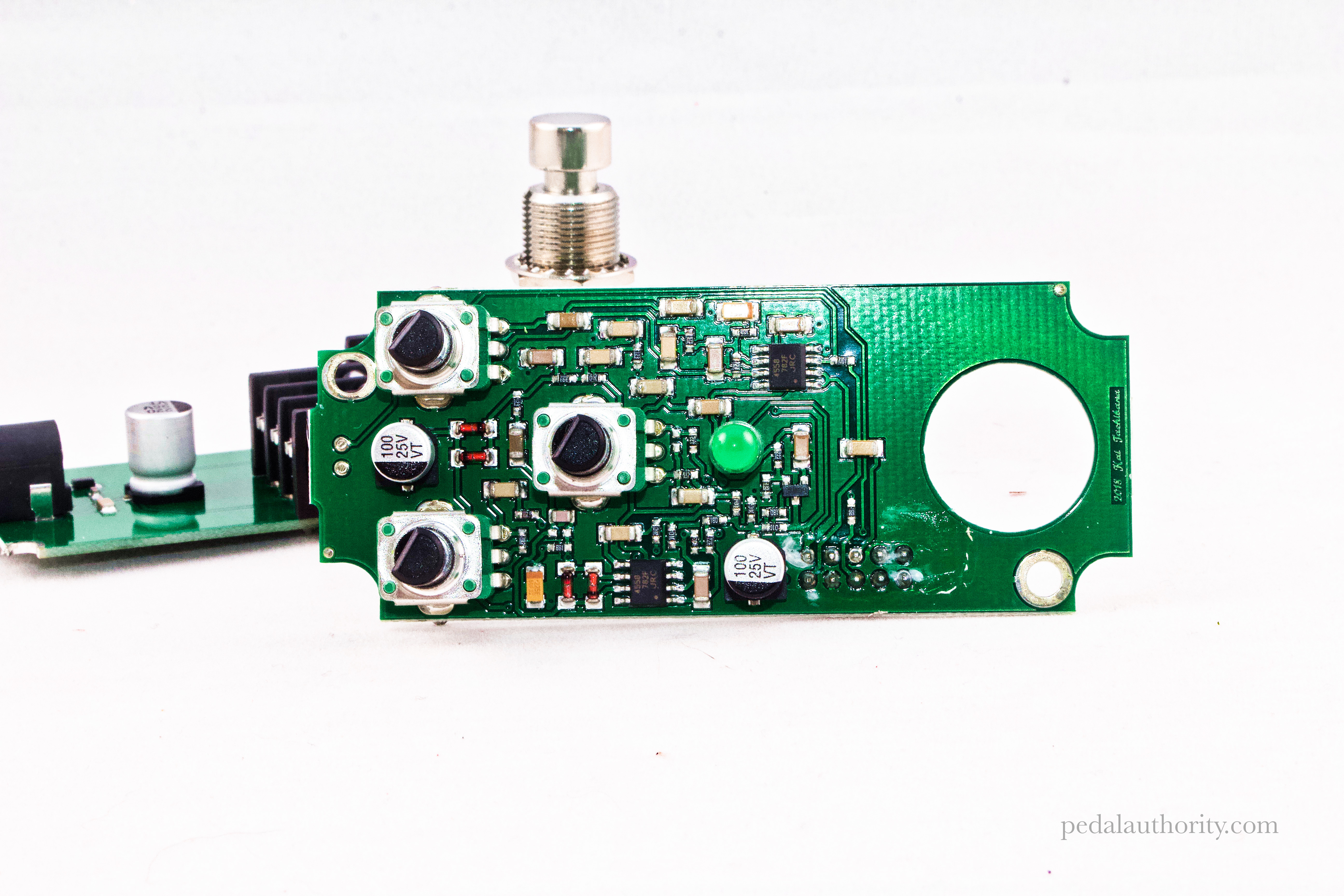 True Bypass: this is a new feature for the ODR series, one that makes sense given current pedalboard trends. When Nobels first designed their ODR-1 in 1985, the boutique pedal market did not yet exist and therefore neither did the rabid demand for true bypass everything, so the included buffer was not considered a drawback. It was also less common to run several drive pedals together back then, so pedals tended not to be designed with huge signal chains in mind. Now, of course, it is quite common to stack drive pedals, and so it is useful to have options both with and without buffers. Of course, if you wanted your ODR to have a buffer, you can still get the original, but the Mini has been rewired to suit the modern demand.

GitD Knobs: this is what Nobels is calling their glow in the dark knobs. It might seem silly at first, but this actually makes a huge difference when on stage. Sometimes the lights are not shining on your board, or perhaps the glare makes it too difficult to tell one shiny thing from the next. Nobels has you covered here. To be specific, it is the position indicators that are painted with glow in the dark paint, so you can always be sure exactly how your pedal is set. This is something that we wouldn’t mind seeing other manufacturers doing.

Mid Click Pot: not the name of your new favorite strain, but rather a small tweak to the sweep of the potentiometer for the Spectrum knob that ‘clicks’ into place at the noon position. Again, very useful for live situations where expediency is the name of the game. This addition makes it easy to quickly flick the Spectrum control back to its neutral position. Given the nature of the Spectrum control (more on this below), it makes sense that this is the knob that Nobels chose to feature this nuance. 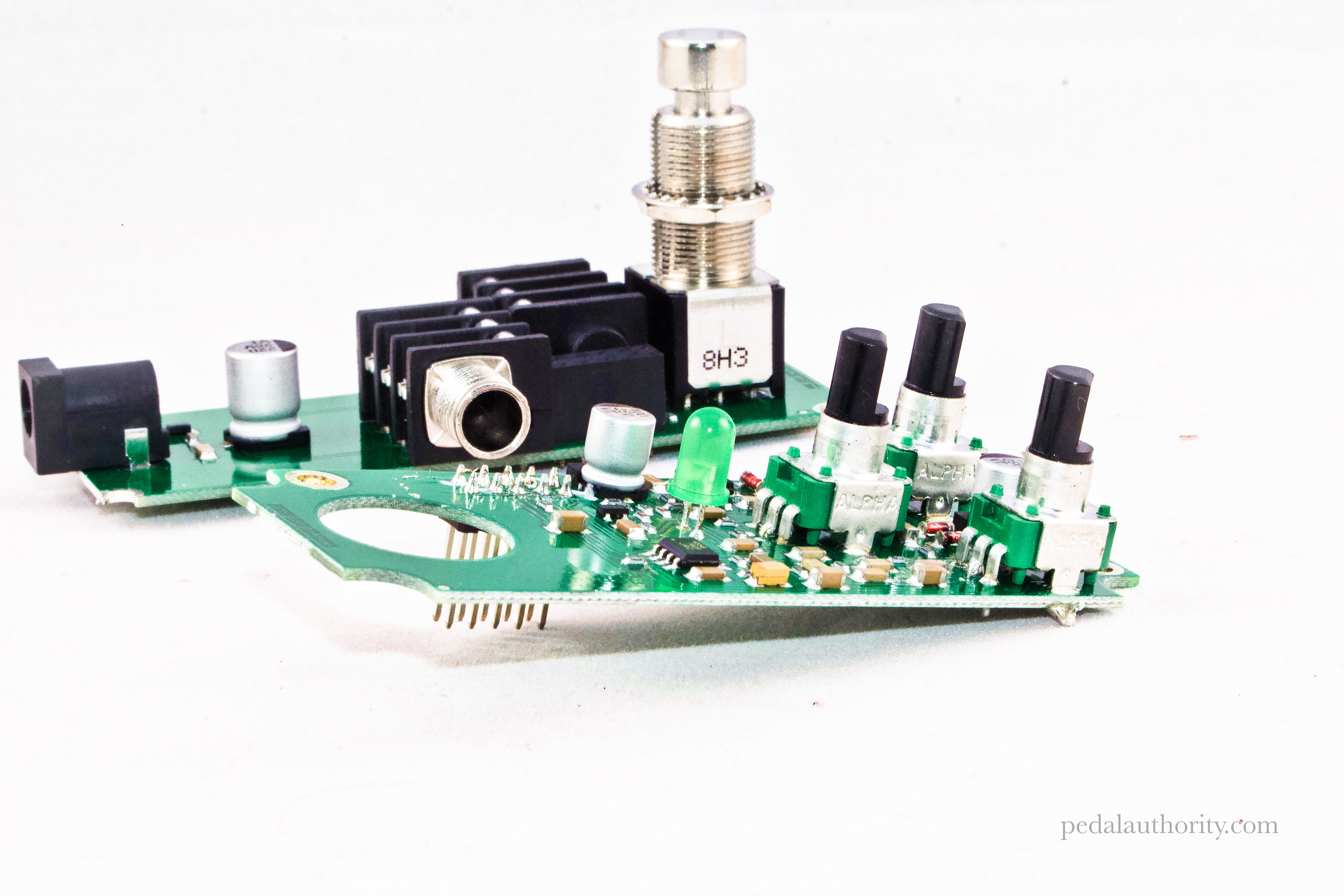 Drive: controls the level of gain, or overdrive. Turn it down for less saturation, and up for more. This pedal is voiced somewhere between a traditional overdrive, and a distortion. With the drive knob set below noon, the ODR-Mini dishes out thick and crunchy tones. When the drive knob is rolled past the noon position, and especially past the 3:00 position, the signal becomes increasingly compressed, like it would with a distortion pedal. The effect is still much more organic than say a Boss DS-1, but it is enough to give the ODR-Mini its own distinct flavor. One of the nice side effects of this compression is that it rounds out the high end, while adding a generous amount of sustain.

Level: controls the output level of the pedal. This pedal has lots of headroom, but not nearly as much as a dedicated clean boost or many klone pedals. This just means that if you are looking for something to solely serve the purpose of boosting your signal, you are probably better off using something with more headroom. Chances are though, if you are considering this pedal, you are looking for more of a dirt box than a clean boost anyway, so this point shouldn’t be cause for any concern.

Spectrum: at first glance would seem like a traditional ‘tone’ or ‘treble’ control, however this is not exactly the case here. Instead of controlling the highs or the high-mids, the spectrum control on the ODR-Mini actually boosts the highs as well as the low-mids. Not the upper-mids, as one might expect, given that those are some of the guitar’s most characteristic frequencies, traditionally speaking, but the low-mids. Despite also being painted green, the ODR-1 does not have the tubescreamer’s characteristic mids-hump. In fact, according to the Nobels website, this is by design: “there seemed to be countless overdrives on the market that had what we describe as the ‘nasal’ tone but we worked hard on creating a very ‘open’ sounding pedal that worked with you and your amplifier.” Instead of the mids-hump and low-end attenuation that a tubescreamer provides, the ODR-Mini delivers a boost to the low-mids, which adds a good amount of amp-like body to your sound. This is particularly useful if you use single coil pickups, and perhaps this is why the Nobels has been so popular in Nashville, where Telecasters have reigned supreme for decades. 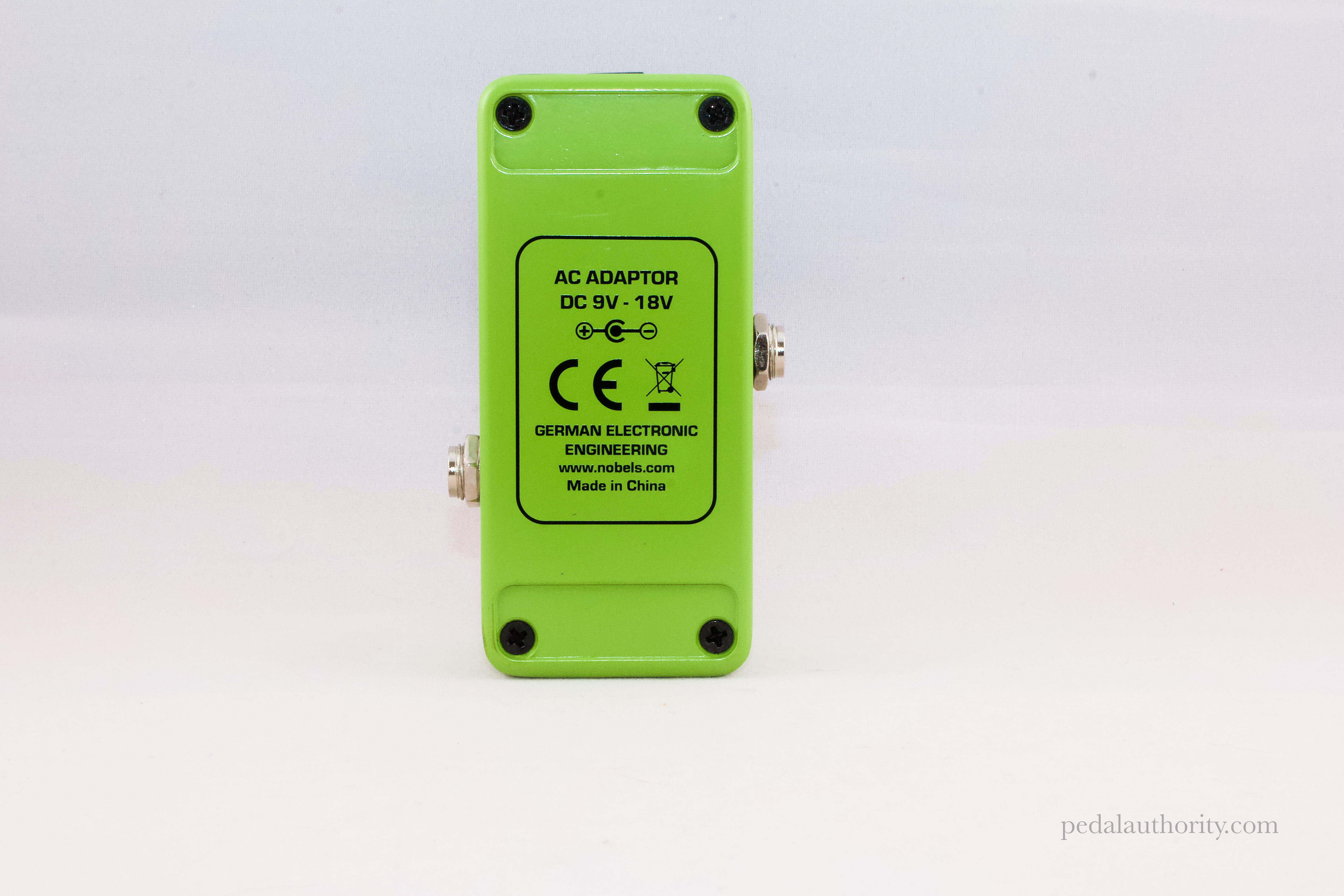 An overall clean signal. Basically what you would expect from a true bypass pedal.

It is clear that the circuit of the ODR-Mini is naturally inclined towards the lows and low-mids. With the drive and the spectrum controls set at zero, the signal remains relatively unchanged until ~5kHz, at which point the frequencies are drastically cut out.

Here is the pedal at its “neutral” setting, which confirms that it is voiced to emphasize the lows and lower-mids. Notice that as long as the drive and spectrum controls are set to equal values the intensity of the lows and lower-mids retain their respective relative values. Compare this spectrogram to the corresponding one for the Boss SD-1, and see that the two pedals are very similarly voiced, with the ODR-Mini having an additional boost in the low frequencies, and the SD-1 having some more presence in the highs.

The relative increase in intensity is to be expected, but notice the incredible amount of energy in the lows and lower-mids. Again, even at its most maxed-out setting, these frequencies are overwhelmingly emphasized. This is something that we do not see with any of the more typical overdrive pedals, like the Tubescreamer or the SD-1.

If you have been wanting to try out Nashville’s favorite overdrive pedal, but have been reluctant due to the size of the ODR-1, the ODR-Mini is here for you. Or perhaps you already have an ODR-1 but you wish that it were smaller, or had true bypass circuitry. The answer, again, is the ODR-Mini. Any way that you spin it, Nobels makes some pretty cool gear with unique and nuanced tones that are definitely worth checking out.